GRAF UK > Blog > What is the difference between a cesspool, a septic tank and a sewage treatment plant?

What is the difference between a cesspool, a septic tank and a sewage treatment plant? 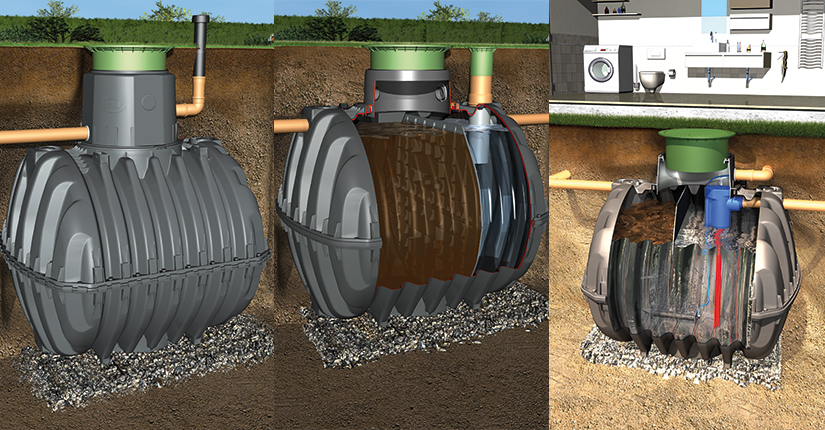 When it comes to building a property one thing you will need to consider is, where is my waste going to go? In most cases you can just simply connect to the mains sewer network however this may be too expensive to do, or the sewer is too far away for you to connect to.

In these cases, you will need to consider, how you are going to deal with your waste on site? You have three options to choose from; a cesspool, a septic tank and a sewage treatment plant.

A cesspool is just a holding tank. It only has one pipe connection fitted and that is the inlet of the tank, which means that all the waste coming from the property is retained within the tank and there is no treatment of the waste. Over time the sewage will build up in the tank and it will need to be emptied by a sewage disposal tanker every other month or so depending on how big the cesspool is and how many people are using it.

A septic tank is a step up from a cesspool. A septic tank unlike a cesspool will have two pipe connections, one will be the inlet and the other will be the outlet and the tank will have a partition wall which is known as a baffle. The baffles job is to retain the suspended solids in the tank, within the primary chamber, leaving the effluent, or the more liquid waste to flow into the secondary chamber. The effluent is then discharged out of the septic tank into a soakaway, which will be made up of perforated pipe, laid out on a gravel bed. Like a cesspool, a septic tank will need to emptied by a disposal tanker however, as some of the effluent is being discharged, you won’t have to have a septic tank emptied as often.

A sewage treatment plant, like a septic tank, has an inlet point and an outlet point and is made up of two chambers. The primary chamber will store the waste coming from the property before it moves to the secondary chamber. The secondary chamber is where the actual treatment happens, with most systems a treatment plant will break down the solids by introducing oxygen into the system which help to keep the natural bacteria inside the tank alive, and the bacteria break down the solids at an increased rate. The treated sewage is then discharged out of the tank into a soakaway or if permitted to a watercourse as the quality of the effluent is good enough to safely enter a watercourse without polluting or damaging the local environment and eco-system. Again, you will need to have a sewage treatment emptied however, as the level of treatment is greater and the level of suspended solids is much lower, you will need to empty a treatment plant every 12-18 months.

With more and more people choosing to build their dream home out in the countryside and cities becoming more and more crowded the demand for off-mains sewage systems will keep rising and it is important for people to know what systems are out there and which system is best for them.