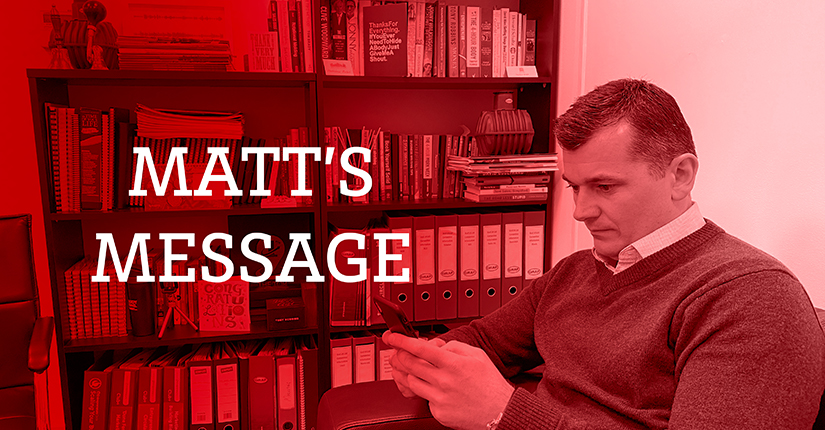 Are you excited about the future? Or anxious and apprehensive?

Are you worried about the economy? Or do you feel confident in your position & your ability to succeed?

As we approach the half-way point of 2020, I’m encouraging my team to think about their current position, and reflect on it, as if they would if they were playing a match. It doesn’t matter which sport, simply choose one that works for you. It could be rugby, football, netball, hockey, basketball, basically any team sport. Then imagine you’ve only got 5 minutes to go until the half-time whistle.

We need to quench our thirst and regain some energy.

But what else do we need to do before we start the second-half?

Do we need a rousing team talk by our coach or manager?

Do we need the leaders within our team, not just the captain, but also the natural leaders in the team, to address some issues and encourage us to raise our game?

Do we need to change our strategy altogether and rethink how we play in the second-half?

Have we got to make changes to our team and bring in replacement players? Do some players need a longer rest? Or do they just need a change of focus?

We need a clear game plan. One that the whole team are on-board with. With clear benchmarks and targets/goals in place. Where do you want to be 5 minutes into the second-half? Then 10 minutes in? Then at the half-way point of the second half. What does success look like? Can all your team members describe it? Are they all on the same page? Are they all working toward the same outcome?

How do you want Q3 to go for you, in your business? Are you clear? Do you have a goal in mind? Are you clear on the steps necessary that you have to make, in order to reach your targets?

As we approach the end of June, now’s the time to consider these things. We find that using this metaphor of the half-time whistle approaching, helps us to focus on our current position. If you’re 3-0 down at half-time and you’re on the losing team, you don’t give up. You know you’ve still got the whole of the second-half to fight back! You know what can happen. You’ve seen so many comebacks, you know it’s possible.

“It’s a game of two-halves” wouldn’t be a saying if it weren’t for one half being completely different to the other half. Whatever’s happened in the first-half, does not have to effect what’s going to happen in the second-half. Yes, there’s a lot of uncertainties right now, but that’s why in business we have to get clear on what we’re doing and how we’re doing it. We have to act on purpose. We have to remain disciplined and take action.

Make the most of your half-time, enjoy your water & oranges, but make sure you use this time wisely, so you & your team are ready to come out and win the second-half. Because you can.

And that’s the final word.