GRAF UK > Blog > The Greatest Salesman In The World

The Greatest Salesman In The World 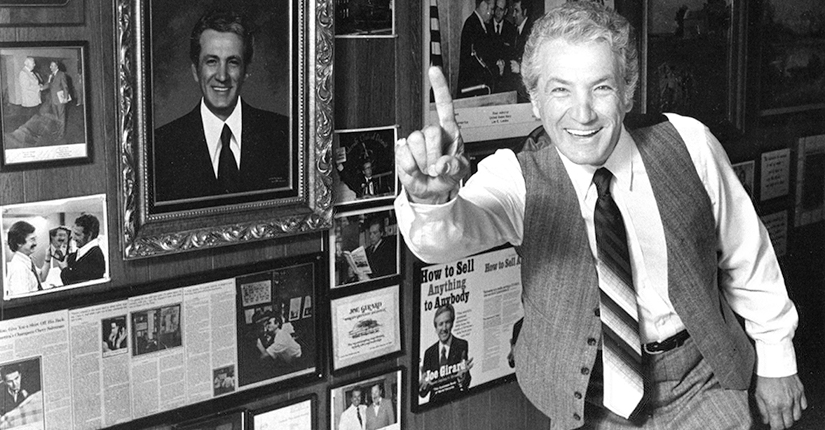 Here’s a question for you… “Are you in sales?”

Even if not directly, i.e. your job doesn’t involve you literally selling something to someone, chances are you’re still in sales. We all are. The cash tills may not be ringing and the denomination may not be £’s, but it’s time, attention, effort, energy, commitment, those types of things. Whether it’s with your customers or your children or your spouse, we’re all selling something to someone. And particularly in business, there’s no question. Whether you’re in sales, or finance, or operations, or marketing, you’re definitely selling and your ability to do it will have a huge impact on how successful you are and how successful your company is.

Here’s another question for you… “Are you smart?”

If you’re smart, chances are you like to learn. Before you try something new you might read about it first? You might seek advice? You might learn from someone with experience? Smart people, in my experience, will learn from other people’s mistakes instead of making all those same mistakes themselves. They’ll seek out advice and lessons from people who have done what they want to do and they’ll learn from them, which will help them succeed in whatever it is that they’re doing.

So, if we’re all in sales and we’re all smart people, it would make sense if you know who Joe Girard is. You’re almost bound to know him.

Joe Girard is ‘The Greatest Salesman in the World’, according to the Guinness Book of World Records. And if he’s the greatest salesman in the world, and we’re all in sales, surely he’s the first one we all turned to in order to learn from his experiences and in turn, improve our own ability to sell?

Truth is, I only learnt about him at Christmas time. I had a meeting with one of my mentors, Damian Smyth, on Monday 30th December when we met to talk through my goals and plans for 2020, and Damian mentioned him. First I’d heard of him. And I didn’t even then act on this new information immediately. It wasn’t until I was writing some of my daily morning emails to my team on 22nd January that I remembered to do some research on Joe Girard. It’s so easy to forget just how many people there are out there who we can learn so much from, in order to become so much better ourselves.

If you have heard of him, which I’m guessing some of you have, he’s quite the achiever!…

On his best day he sold 18 vehicles.

By himself, Joe Girard has sold more cars than 95% of all dealers in North America.

To make it even more impressive, he sold every single one of them at retail – one vehicle at a time.

When he first went for the job he had to almost beg the dealership to take him on. In fact, a condition of him getting the job was that he had to agree that he wouldn’t deal with any of the incoming walk-in traffic (customers) because that would upset the other salespeople who already worked there. So, he agreed to this and said he would generate all his own leads. At first this was difficult but then he found out what mattered and what would help him sell cars.

He quickly realised that anything that had to do with the process, like the flow of paperwork, or the order of explaining product features and benefits to a customer was not where he would find an edge to be better than other sales people. He realised that anyone could do that. They all had access to the same paperwork flow and the same product training about the features and benefits to the customer, so there was clearly no advantage to be gained there. He quickly discarded any process, or product detail, or anything related to how the dealership operated. At that point it was clear there was only one thing left – HIM. As soon as he narrowed his focus onto himself and how he did things, he was able to pinpoint some very special characteristics – 13 to be exact. And he soon found that these would apply to everything he did in life, not just in work-related things.

You can read about these 13 characteristics, as I have done, in his book ‘Joe Girard’s 13 Essential Rules of Selling.’

To quote a paragraph from the introduction, he says;

“The elevator for Health, Happiness and Success is ‘out of order’. You’ll have to use the stairs, one step at a time, just like I did – a kid expelled from high school with a bad attitude. How about that for a place to launch your future? But it can be done. I am living proof. In spite of setback after setback, whatever the world threw at me, I made it to the top just the same! IF I CAN DO IT, ANYONE CAN!”

The book is split up into 4 parts, which cover the following 13 rules:

Rule #2: Have a Positive Attitude

Rule #4: Work When You Work

Rule #11: Lock Up Every Opportunity

Rule #12: Stand in Front of Everything You Do for Others

Are you intrigued? Will you get the book to learn more? I can highly recommend it. And if not the book, he’s well worth 20 minutes on Google to read a bit more about him. The companies who fill the testimonials page on his website alone, provide all the proof anyone could need to confirm his credibility. If you want to improve your sales – and remember, that also includes “sales” in the broadest sense of the word – then learning the incredibly simple yet effective techniques that Joe Girard used to sell that many cars is a good place to start.

To give you an insight, he knew more about his customers than most members of their own family did. He was so genuinely interested in people, their lives, their families, their interests, and he called and wrote to them every single month without fail, to keep in touch. Because of his relationship with them, which was built on genuine interest (not fake interest just to try to sell them something – that never works) he was the only person they were ever going to buy their next car from. He knew that people don’t buy products, they buy people who they like and trust who can solve their problems.

Joe Girard broke records to become the greatest salesman and then shared his experience through books, training courses and speeches to help other people do the same. His materials are all still available to anyone who wants to learn from him. Will you take advantage?