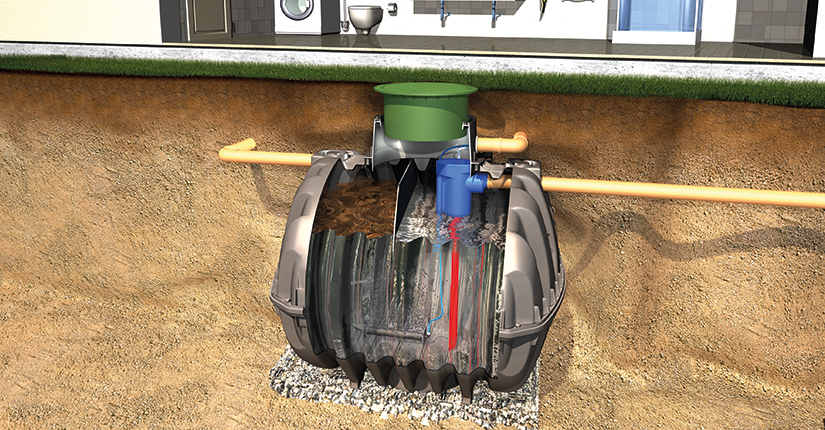 Wastewater treatment system One2Clean proves the one to go to.

A new-generation One2Clean wastewater treatment plant from Graf UK has beaten the competition to meet the super-stringent requirements of the Scottish Environment Protection Agency (SEPA).

A Graf UK One2Clean tank, which uses a Sequencing Batch Reactor (SBR) system, has been installed at a new private house next to the Sands of Forvie Special Protection Area overlooking the harbour in the picturesque former fishing village of Collieston on the North Sea coast in Aberdeenshire.

Although it was originally selected by the specifier with the advice of waste and wastewater specialist Syd Ross of Inverurie-based private water systems specialist Filpumps, when it came to installation a RBC (Rotating Biological Contactor) rotating disc system appeared on site in an apparent error by the builder who had been told it was better.

The specifier, having spent two years agreeing the specification with SEPA, advised Building Standards the RBC rotating disc system was incorrect and was quick to advise SEPA that it would be changed to that agreed – the Graf UK One2Clean.

The RBC rotating disc system was not allowed as it could not perform to the required standards for a four-bedroomed house on the top of a hill just metres from the sea. And so, the future-proof Graf UK seven-person One2Clean system was then purchased by the client from Filpumps.

Syd explained that the site had previously been refused planning and building consent because SEPA was concerned about the discharge levels from a proposed treatment plant within a domestic situation.

He was then approached by building surveyor Colin Wright, of Colin Wright Surveyors and Envirotec engineering, to come up with a solution they could re-submit to SEPA for registration consent which was agreed to after much liaison with SEPA.

Syd said: “I proposed Graf UK’s One2Clean SBR system due to its high-quality discharge levels but also its ability to be able to cope with high and low-level influent handling capabilities which is a major concern with SEPA. SEPA consent was given on the understanding that the One2Clean with these discharge levels was installed.

“However, someone thought the RBC rotating disc system was a better plant and purchased it for this site. Alas, its performance was not good enough to meet SEPA requirements for this site. Filpumps came to the rescue and supplied the proper wastewater treatment plant, Graf’s One2Clean, which is SBR technology and meets this site’s requirements.”

SBR systems were designed specifically to enhance the anaerobic conditions that encourage biochemical activities within the tank. They have two chambers – an influent primary tank and a reactor vessel. The latter is fitted with a fine bubble diffuser located 100mm above the base which drives the mixing and aeration processes. Air lift pumps transfer the crude sewage from the holding tank into the reactor chamber and pump out the effluent while also encouraging increased oxygen transfer and mixing.

Colin Wright BSc ICIOB said: “I used Graf UK’s SBR system as it is efficient and has BOD and ammonia numbers well below the required numbers, as much as 40 times better than the EU standard required. The SEPA system of soakaway factoring requires large areas compared to the regulatory calculation for area but the water is so clean out of the Graf UK tank that there is little problem with soakaways sludging up.”

He added: “I also like to use the One2Clean system because it is simple technology with little in-tank moving parts that makes it reliable for many years and easily serviceable economically. I don’t like to use mechanical pumped systems as they have pumps in sewage that require to be serviced. Other systems we have used in the past have required a lot of work to maintain.”

“We have used this tank successfully on a couple of projects whereas with others where we used a RBC rotating disc system they needed replacement after five years. The aim is to provide the client with a system that is reliable and trouble free.”

Colin said: “The information available from Graf UK is good, easily understood by myself and engineers and also SEPA, and the support from Graf UK and Filpumps, its agent locally, is good.”

Graf UK sales manager Steve Righton said: “If there was ever evidence enough that our systems are superior, and superior enough to meet the super-demanding Scottish standards, then this is it.”