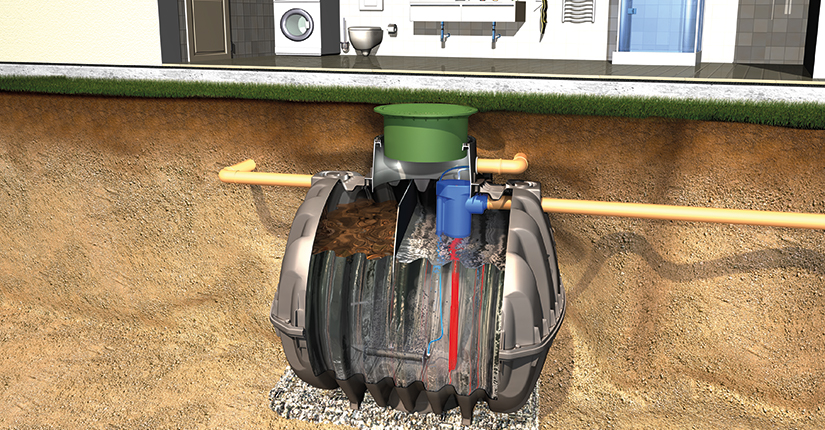 A town in Cornwall is fast becoming a model of wastewater treatment best practice, thanks to a mechanical engineer who has become an ardent fan of Graf UK’s sewage treatment plants.

Bryan Gynn runs Kernick Motors in the town of Launceston, on the Devon/Cornwall border, as well as Higher Kernick Farm, a large holiday cottage on a 50-acre smallholding in the village of Egloskerry, in an Area of Great Landscape Value.

He has also recently become an approved installer of Graf UK wastewater treatment plants, so impressed has he been with the One2Clean system from Graf UK that he installed one himself 12 months ago, not to mention five immediate neighbours and another three planned in the near future.

A past parish council chairman, Bryan was initially drawn towards Graf UK’s One2Clean wastewater treatment system which uses an SBR (Sequencing Batch Reactor) process, because the water expelled from the plant is of the highest quality. Further research revealed that Graf UK’s system combined with the manufacturer’s infiltration tunnels take up a smaller area on site compared to a conventional drainage field.

SBR systems were designed specifically to enhance the anaerobic conditions that encourage biochemical activities within the tank. Aeration is incorporated via a diffuser at the base of the tank. This is followed by a sedimentation period. The air lift pumps then extract the treated effluent from the tank for discharge.

Or in Bryan’s words: “The One2Clean tank uses an SBR process which treats the foul water via two batch cycles per day, then pumps a large quantity of very clean treated water into the drainage tunnels for infiltration into the ground. It is quiet and the running costs are similar to a low energy light bulb.”

He added: “But having installed and run the system, the advantages go on and on.”

So, Bryan has many reasons for liking the Graf UK system. And another one of them is what the teccies term “underload”.

Underload is where there are fewer people living in a property than the wastewater treatment system it uses was designed for. For instance, it is very common to have two people living in a five-bedroomed house which would have a seven-population system. So, there will be considerably less effluent going through the system than it is designed for and as most systems run all day, every day, this lack of “operational material” can cause issues.

Graf UK’s advanced systems have underload detection as a feature but even the standard One2Clean system can deal with up to 75% underload efficiently. In fact, Graf have found it can actually work as efficiently in underload. This means the system will still work to a very high standard with two people living in a property even though it might be designed for up to seven people, with improved effluent quality and less frequent emptying periods.

In Bryan’s words: “The engineers I have spoken to report that the slightly larger tank works really well and does not require emptying very often. With the One2Clean system, the treated sludge is very much reduced in volume when the tank is operating well. My own seven-person tank is less than 30% full after 12 months and two people in the house.”

Bryan concluded: “I passionately believe in Graf UK, both as a company and in their wastewater, surface water and rainwater products. Their environmental credentials are second to none and their products in my opinion are way ahead of the competition. It is a real plus that they fall into a similar price bracket.”