Burnbridge gets hitched in Highbridge and Henley 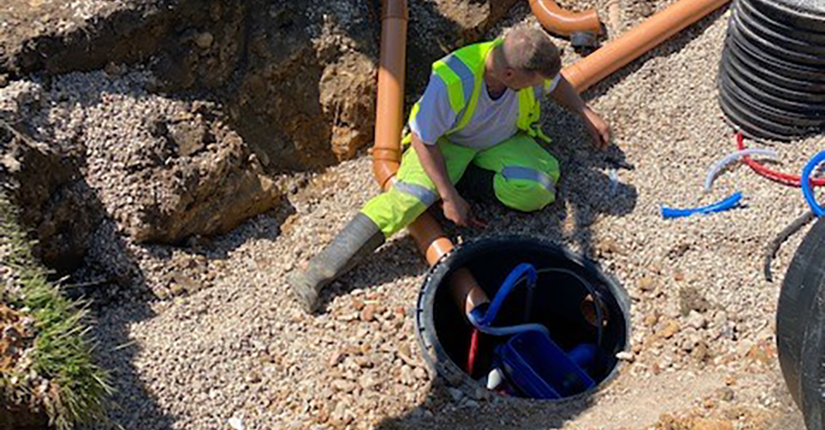 Richard Crook has spent 25 years in the wastewater treatment industry.

Much of that time was spent travelling the world as a project manager for a well-known manufacturer of sewage treatment plants, installing, refurbishing and maintaining sites ranging from a four-person small domestic plant to the largest RBC (Rotating Biological Contactor) plant in Europe – a 15,000-person site in Keady, Northern Ireland.

These projects were in some of the most challenging weather conditions on the globe, such as the blistering heat of the Sahara desert in Algeria and the -40° temperatures of the Cairngorm mountains in Scotland.

But five years into running his own specialist contracting business it is the simple but intelligent systems by Graf UK that Richard uses on 90% of his projects, schemes that now include rainwater harvesting as well as wastewater treatment.

Richard’s company, Burnbridge Services, which he runs with his wife a from a head office in Burnham on Sea, Somerset, is currently commissioning its latest rainwater harvesting project, for Highbridge Caravans, in the town of Highbridge in Somerset.

The company had already supplied Highbridge Caravans’ Devon site with a new Graf UK sewage treatment plant to replace a septic tank that did not meet the latest General Binding Rules but the directors had also wanted the new system to be more environmentally friendly and brought this same ethos to their Somerset site.

At the Highbridge site, two of Graf UK’s XXL Carat tanks have been installed. These underground tanks were specially developed for rainwater harvesting as well as a retention cistern, firefighting water tank, process water tank and septic tank. Available in sizes ranging from 16,000 to 122,000 litres, the two used for the caravan sales company are 52,000 litres each, with the potential for a third tank.

Measuring 14m x 3m, they were designed by Graf UK to handle a potential yield of 4,751 litres of rainwater run off per day from the roof of a 100m by 20m workshop. Usually the 16m by 9m excavation would have simply been backfilled with gravel.

But due to the 4m depth of the excavation, which required sheet piling and reinforcing, and the fact it lay close to a busy railway line, concrete was selected on this occasion, using 20- and nine-tonne excavators, five-tonne dumper truck and pile driver.

I have formed a really good relationship with Graf UK. They provide me with so much technical support and backup. I don’t need to waste my time looking for other products on the market. Graf’s may not be the cheapest, but their systems are excellent quality and the support is first rate.

Burnbridge Services has also recently commissioned one of its largest combined rainwater harvesting and wastewater treatment projects, for a large private house in Bix near Henley on Thames, owned by the CEO of a company supplying fruit and vegetables to the fine dining market.

The five-bedroomed home had a 100ft garden that constantly flooded and fearing for the foundations of the 300 to 400-year-old property and the risk of sewage seeping from the old septic tank, the owner contacted Burnbridge for advice.

Following a three-hour site survey, Richard suggested the water be harvested and recommended a 10,000-litre Platin Silentio system to collect the run-off from the garden, toilets and utility room, as well as a 10-person Klaro Professional wastewater treatment system.

This not only involved much plumbing work inside the house but also redesigning the downpipe configurations, digging trenches from them to follow a new fall, digging a total of four excavations as well as a drainage field, removing 350 tonnes of earth, and then installing multiple sprinklers, landscaping and reseeding it. This work took a team of up to 12 people four weeks.

The whole project had to be planned extremely carefully as there were so many different factors and it was a tight site, so delivery slots had to be carefully scheduled. But the client was happy with the backup support which was constant.

Burnbridge Services’ rainwater harvesting projects, which now number 30 a year, are fast catching up with the wastewater treatment ones at 52 a year, and Richard is expecting the former to outstrip the latter within the next year or two.

During the Covid lockdowns we definitely had more enquiries about rainwater harvesting because I think people had the time and cash available to think about and invest in the environment. I can see this part of the business getting bigger and bigger, helped by the fact there will come a time when everyone will have upgraded their septic tanks. Graf have been very hands on in their support of us and their products are top quality for a reasonable price. I don’t want to go anywhere else.