A Job Done To The Maxx 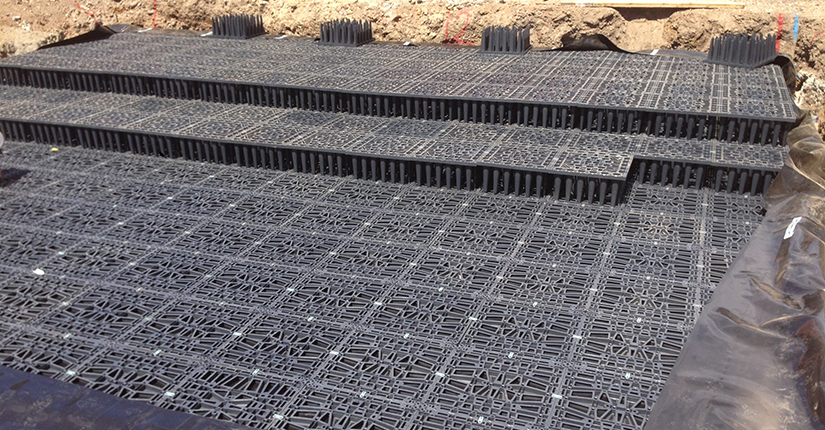 We always try to avoid starting an attenuation tank installation on a Friday, especially when we know it’s going to take more than 1 day to finish. However, sometimes it’s unavoidable. Especially when the job is supposed to start on the Monday prior but when the excavation is being carried out and the contractor finds basement beams and lots of unexpected concrete which has to be broken out, taking considerably longer than they had anticipated. So, Friday it was when we sent our dream team of Andy, James & Dean down to London to install their first tank using the new EcoBloc Maxx system.

Fortunately, Andy and Dean had been in London on the Thursday, so they battled their way across town to get to the site to get the induction done and out of the way on the Thursday afternoon. And when I say battled their way across town, I mean it; it was the day of the tube strike so there were more cars and bicycles on the roads in central London than ever before! Which is far from what our two Yorkshiremen are used to! However, they got there and got the induction done and confirmed that the hole was good and ready for the installation to commence first thing on the Friday morning.

James joined them on the Friday morning and the three of them got cracking. Fortunately, the base of the tank had been prepared very well and all was nice and flat, which is ideal for the installation. Especially using the Maxx blocs for the first time, it was very helpful to be able to lay all the base plates out nice and flat before continuing to fit the subsequent layers above.

The smaller pallets were much easier and quicker for the contractors to transport into the excavation for us. The EcoBloc Maxx comes on small stacks of 800mm x 800mm square and are around 1.5m tall, meaning the top bloc can be taken off the stack by hand and you don’t have to sling every stack over on to its side or anything like that. So, the Maxx blocs were supplied at a good rate and our three installed them quite quickly, especially considering they’d only practised with a very small number of the Maxx blocs when they were shown the system at its original launch event at the factory in Germany earlier this year.

By the end of the Friday they had actually got most of the blocs installed already, leaving a maximum of around a third to finish fitting on the Monday morning. When they returned on the Monday it didn’t take them long to get the rest of the blocs into the hole and all clipped together. Slowed down slightly due to the fact that we’d sent two of our sales guys down to site to watch the installation as they hadn’t seen the EcoBloc Maxx system being fitted before.

Halfway through the day they were wrapping up the tank with the membrane and welding all the seams and joins. By mid-afternoon they’d completed the pipe connections and wrapped up the fully sealed tank with the protective geotextile and got away at a decent time to go and sit in the London traffic again! They do love all the jobs in London that we send them to!

Another attenuation tank done well. And the first of many more using the EcoBloc Maxx system.